We all know that the prices of everything — from gasoline, to groceries, to the grains & hops needed to make beer — are on the daily rise; nothing unique there. With the price of beer rising for the breweries, so it rises for the distributors and so on down the line to the bars and eventually you and I.

The bars can only charge their patrons so much for a pint before they start to leave in droves. So instead, a number of bars and restaurants around the U.S. have begun to cheat. Rather than up the price of their pints too much, they’re just giving customers less than a pint of beer and simply not telling them. Some restaurants and bars have reportedly replaced normal 16 ounce pint glasses with 14 ouncers — a type of glassware commonly called a “falsie.”

According to the Wall Street Journal,

Two of the world’s biggest glassware makers, Libbey and Cardinal International, say orders of smaller beer glasses have risen over the past year. Restaurateurs “want more of a perceived value,” says Mike Schuster, Libbey’s marketing manager for glassware in the U.S. Glasses with a thicker bottom or a thicker shaft help create the perception. “You can increase the thickness of the bottom part but still retain the overall profile,” he says.

Even if they’re lucky enough to get a full pint glass, customers around the country are complaining that bartenders are increasingly putting less than 16 ounces of beer in a pint glass, filling up the extra space with foam. The Journal notes,

Evidence of short-pouring is hard to nail down, but there are signs the practice is common. Romano’s Macaroni Grill, a national chain, uses the thick-bottomed 14 ouncers in at least some of its locations; a Romano’s bartender in Portland, Ore., volunteered the nickname “falsies.” (A corporate spokesman for Romano’s declined to comment.)

But is two ounces really that big a difference? Archie Gleason, director of marketing for Hooters — which 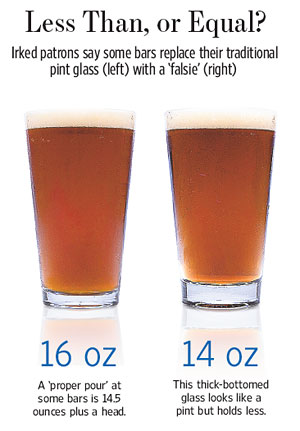 has been noted as serving draft beer in 14-ounce glasses at franchised locations in Ohio, Indiana, Kentucky and Tennessee — claims “We can get 20 more beers out of a keg that way”. With the prices of kegs of beer going up at a nauseating pace, 20 extra beers per keg must go a long way.

Many beer advocates are discussing developing stickers to adhere to the windows of bars and restaurants where pints live up to the name. And Oregon legislator Brian Clem is going so far as to take up the issue for the state’s 2009 budget, hoping to fund monitoring of beer portions by the state’s agriculture department.

So, what can you do if you feel you’ve been shortchanged on your pint? The Journal article concludes you,

Can ask for a “top-off” after the foam on the profit pour settles. That’s what George Collentine did when he was served a beer with almost two inches of foam at an Italian restaurant this month. “I just waited,” says the 38-year-old chemical-company manager from Danbury, Conn. The bartender gave it to him.

Have you been privy to any pint falsifying? Please let the readers know who to be aware of by leaving a comment!