I’m about to divulge a very embarrassing story, but this evening my girlfriend was away at dinnertime — volunteering for Portland Adult Ed — so I thought I would do something slightly romantic for once while she was gone and cook dinner to be ready & waiting when she got home. Well, I improvised a little and created a pretty tasty little pasta dish with some veggies, fake meatballs and some peppers and spices.

Well, for some strange reason I thought it advisable to crush a dried hot pepper by hand and sprinkle it into the sauté; 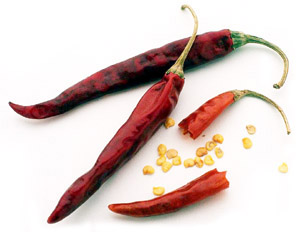 and it wasn’t a bad idea, it tasted quite good actually. But, getting to the point, I must have had some of the oils from the pepper still on my hand when I rubbed my nose post-meal. Well, needless to say – my nose flaired up instantly and it hurt like a SONOFABITCH!

As quickly as I could, I Googled “Hot pepper in my nose” and clicked on the Yahoo! Answers thread which came up first  in the Google results. Much to my surprise, the two most common responses for to how to stop nose pain caused by pepper oil were milk and beer. I threw open my fridge, discovered that all I had was soy milk and grabbed a beer instead (something I did have an abundance of); poured it into a bowl and stuck my face right in (I was in a whole bunch of pain at this point). Well low & behold, a few minutes later, my nose started to calm down and the pain started to subside.

I’m still not all the way back to normal but there’s no doubt that the beer definitely helped! So moral of the story? The next time you get hot pepper oil in your nose, stick your face in beer! Cheers!