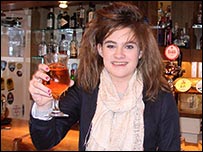 lowest level for 70 years with sales supposedly down 49 per cent since they peaked in 1979. But one young entreprenuer is doing her part to change all of that. That’s right, I said “her”.

“Real ale has typically and consistently been marketed towards men with names full of cheesy puns and innuendo, and images of buxom wenches serving up frothy jugs. They can keep all that – there’s no need to move on, lads – just move over.”

Easton teamed up with a local brewery, Hanby Ales of Wem (whom I’m personally nominating for best name for a brewery, EVER), to create a beer designed for and marketed to women. After 18 months and £35,000 of research and development, the finished product is a light ale with extract of orange and a modest 4.2 per cent alcohol.

One can only hope that with success comes new haircuts…