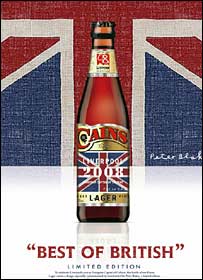 This year marks Liverpool’s Capital of Culture year in the U.K. To celebrate, Cains Beer –based in Toxteth, Liverpool — plans to produce 250,000 bottles of their Best of British Lager featuring a Union Jack with the signature of artist Sir Peter Blake. If that name doesn’t ring a bell, another one of his works of art might – the cover of the Beatles monumental album Sargent Pepper’s Lonely Heart’s Club Band. According to The BBC News, Sir Peter said:

“Cains wanted a bottle that would encapsulate the ‘Best of British’ activity and provide a fitting tribute to Liverpool during its Capital of Culture year.

To me, the Union Jack seemed like the perfect choice – it’s an enduring symbol of national pride and one of the few things that is instantly recognisable as being British.”

The specially-labelled bottles of Cains will be available until December in the Tate Britain and the Tate Modern galleries as well as supermarkets. Anyone overseas want to ship one back for me?