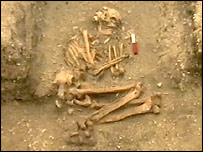 BBC News is reporting that a 4,000-year-old Bronze Age skeleton has been unearthed by archaeologists working in east Kent (England). What does this have to do with beer, you ask? well, the skeleton was found in a crouched position with a “beautifully decorated” pot at its feet. A pot, it is believed, the person used as a beer mug! Education officer Marion Green said,

Tests on beakers from other sites suggested Bronze Age man was brewing a type of beer from grain.

Additionally, ceremonial objects were found buried with the individual, who could have been a high-status male, Green said. Apparently the folks in the Bronze Age revered their brewers (rightfully so)!

For more on the skeleton, including video, click here.