I’m about to head out on a three day jaunt through the woods of Crawford Notch, NH (with a very important stop at Moat Mountain Smokehouse & Brewery in North Conway on my way home) but I found a great article from the Durango Herald this morning which I wanted to pass along.

The article highlights a few Colorado breweries — Ska Brewing Co. and Steamworks Brewing Co. — who have recently discovered the benefits of putting their beer in cans. According to the Durango Herald,

When Ska Brewing Co. debuted a beer in February, it released the ale in bottles and cans, hoping to capitalize on a growing trend in the brewing industry.

Five months later, cans of the Modus Hoperandi India Pale Ale are outselling the same beer in bottles by 2-to-1.

Ska is selling so many cans the company is struggling to brew enough beer to keep up. The Durango brewery recently added two, 2,790-gallon fermenting tanks to fulfill demand. 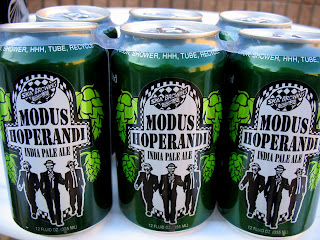 And how fitting is it that this year marks the 50th anniversary of beer in cans (Coors first canned beer in 1959 at its facility in Golden, CO). But Oskar Blues was the first craft brewery to really put its beers in cans — they first put Dale’s Pale Ale in cans in 2002 — and since then, growth in the segment has exploded. Today, forty North American craft brewers now can their beer, including seven in Colorado alone.

“The bottle inevitably falls short of the can,” said Gamble [beer manager at Star Liquors in Durango], citing fresher smells and sharper taste from cans. “It generally seems to be a little bit better product.”

Brewers touted the portability of beer cans that can be taken on the river, to the golf course or down the trail. Aluminum cans are also more easily recyclable and lighter to transport.

The article from the Durango Herald is a good read and one which helps to further taut the benefits of cans over bottles when it comes to better beer. What do you think? What’s your favorite canned beer?