The following is a guest post written by Dave, a craft beer drinker and occasional craft beer writer at sevenpack.net. If you would like to write a guest post for BlogAboutBeer.com, please give me a shout. 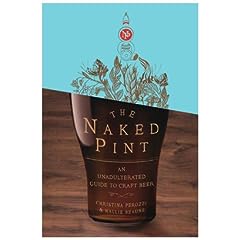 What The Naked Pint lacks in pictures, it makes up for in beer knowledge. Do not get me wrong, this book is not the end all be all of beer tomes. It does however give the craft beer beginner a very good start into craft beer culture. It also provides a good reference point for craft drinkers who want to learn a bit more history about the beers they have been drinking, or venture into other aspects of craft beer culture.

The book starts out simply enough with beer’s ingredients, how those ingredients become beer, and what those ingredients add to beer’s taste. The authors also discuss lagers vs ales, IBUs, ABVs, beer bar etiquette, mouth feel and criteria for a great beer. The book then moves onto beer styles. The styles start with the most accessible (Pilsners, Hefes, etc) and culminate with the most adventurous (wild ales,
IIPA, etc). I found this to be the best section of the book, and fortunately it was the longest. The styles were not overly esoteric, with someone being able to bump into them at a good beer store or craft beer bar. The book describes each style’s tasting points and it delves into the style’s history, introducing both sides if there is debate about said history. Then it lists two to five beers (depending on the style’s popularity) representative of the style, with short one to two sentence tasting notes. Though all “representative beers” are probably not available to all readers, I felt obtaining one per style would not be too much of a hassle (though MA has pretty good beer distribution, so people’s experiences will vary). In all, enough information was provided to whet my appetite but not so much as to bog me down with the minutia of style information. I found this kept the book moving and provided a nice jumping off point for further style history investigation if I was so inclined.

With the styles out of the way next came talk of glassware, stocking one’s fridge, and brief points on aging. One thing that irked me was the fact the authors write that only a wine fridge will do for beer storage and not some college dorm fridge. Ahem. Sure it is not as pretty as a wine fridge but it certainly is less expensive, especially if such a fridge was left over from said college years. Anyway, only a minor gripe.

Next the book rolls along into beer and food. The book discusses beer and food “pairings” and though it gives some specific examples of pairings, it gives more general hints then anything else and leaves the topic with a “try it yourself and experiment” vibe. The book also provides a bunch of recipes with beer as an ingredient. The recipes look promising, if not a little daunting, but I have yet to cook any of them.

From cooking, the book moves to home brewing, discussing the tools, vocabulary, and steps of home brewing. The book even includes some home brew recipes. As the book concludes it discusses ideas on how to entertain with beer (tasting parties, beer dinners, etc) and further beer reading resources.

Though the book is written more for the “new to craft beer” person, I still found intriguing little tid-bits of information scattered through out. I also believe the book makes a nice quick reference source due to the book’s general knowledge and extensive index. I do wish the book provided a full list of all the beers mentioned in the styles section, because that list would make a real handy reference too (maybe in a follow up version). The book also got me more interested in beer history, which led me to include The Zythophile and Shut up About Barclay Perkins in my RSS feed. Overall I enjoyed reading the book and found it quite entertaining.

Shout at the Devil’s Food Cake: One Man’s Drunken Journey to a “Sexier” Self