Portsmouth New Hampshire-based Smuttynose Brewing has officially retired their Portsmouth Lager after rumors of the beer’s demise had been swirling for nearly a year. The beer has been replaced in the Smuttynose everyday line up with a new brew entitled, “Star Island Single”. According to David Yarrington, the Smuttynose Executive Brewer,

Several trains of thought converged in the decision process to arrive at this style.  Our first concern was accessibility.  We really wanted a beer that would appeal to a person just getting into craft beer as well our loyal customers looking for a lighter style.  With so much emphasis on Extreme Beers there has been a growing undercurrent of desire for what we like to call session beers.  Star Island Single is our offering into this realm.  The beer itself is our take on a Belgian style single ale brewing to around 5% ABV with generous amounts of Honey Malt as well as Demerara sugar used to lighten the body.  The yeast is our house Belgian strain that adds subtle fruitiness that we’ve balanced with a dash of coriander.  As we’ve been drinking the trial batches we’ve become more and more exited about how this beer is turning out.  Hopefully you’ll  enjoy it as well. 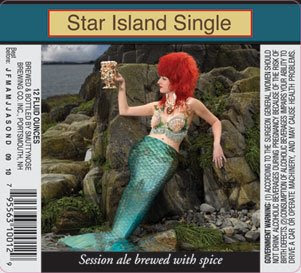 It sounds to me like this new brew will still grab ‘hold of the remaining Smuttynose Lager fans, while pushing the envelope just enough to entice some of the fans of Smuttynose’s ballsier beers. Smuttynose owner Peter
Egelston goes on at length on his blog Smuttynose Tavern about the company’s choice to phase out and eventually completely retire the Portsmouth Lager. Egelston says,

After a slow launch in a down market, and encountering indifference from our local wholesalers and retailers, Portsmouth Lager never gained traction in the market. Cut out of the sets in the supermarket chains, where 80% of the beer is sold in New Hampshire, it became nearly impossible to find in our home state, except on draught at the Portsmouth Brewery, where it has been consistently one of our most popular offerings. People would discover it in a Variety Pack and write to us asking where they could buy it, and we’d shrug helplessly. So while all of our other brands were growing, Portsmouth Lager numbers remained static, buoyed up artificially by the significant volumes that were served at the Portsmouth Brewery and placed in Variety Packs. And the warm embrace we anticipated from Portsmouth’s bars and restaurants never happened; most of them remained perfectly content to offer up Boston Lager as their local beer.

For more of Peter’s thoughts on the elimination of Portsmouth Lager and the introduction of the Star Island Single, read his original Smuttynose Tavern piece on the subject here. And keep your eyes on your favorite Packie’s shelves; Star Island Single should be there any day now. Cheers.